BCAM researchers receive one of the SEIO-Fundación BBVA 2022 Awards 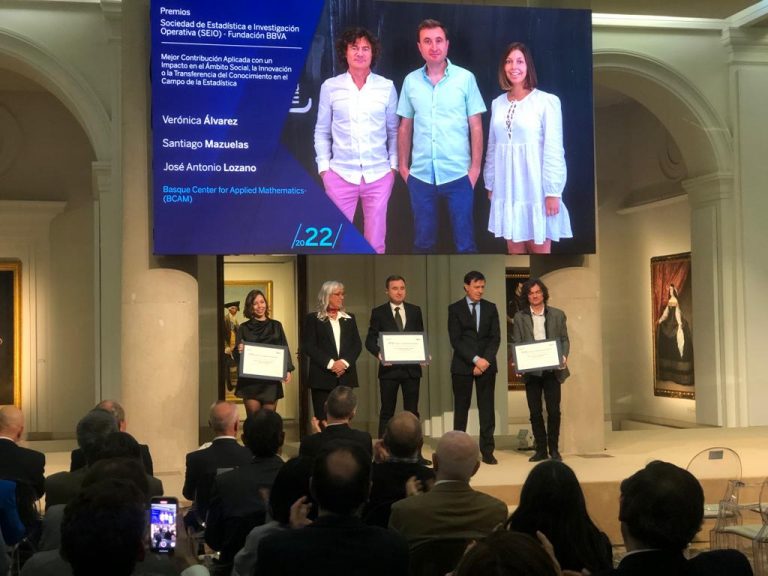 The article Probabilistic Load Forecasting based on Adaptative Online Learning by Verónica Álvarez, PhD student at the Basque Center for Applied Mathematics – BCAM, Prof. Santiago Mazuelas, Ikerbasque Research Associate at BCAM and Prof. Jose A. Lozano, Scientific Director of BCAM, has been awarded in the category of Best Applied Contribution in Statistics at the SEIO – Fundación BBVA Awards. The ceremony for such awards was held this Wednesday at the Palacio del Marqués de Salamanca in Madrid. The event was attended by Rafael Pardo, Director of the BBVA Foundation, Begoña Vitoriano, President of the Society for Statistics and Operations Research, the rectors of the universities of Castilla-La Mancha and A Coruña, Jose Julián Garde and José Luis Meilán Gil and the President of the National Institute of Statistics Elena Manzanera.

The article Probabilistic Load Forecasting Base don Adaptative Online Learning, published in IEEE-Transactions on Power Systems, presents artificial intelligence techniques that learn to predict the energy consumed, adapting to changes in consumption patterns. Learning and prediction techniques are proposed and their performance is experimentally evaluated in multiple scenarios. In particular, the authors develop adaptive online learning techniques that update model parameters recurrently, and sequential prediction techniques that obtain probabilistic forecasts using the most recent parameters. The method is evaluated using datasets corresponding to regions that have different sizes and show varying consumption patterns over time. The results show that the proposed method can improve the performance of existing techniques in a wide range of scenarios.

Verónica Álvarez, PhD student of Machine Learning research line, says “receiving this award has served as recognition of the work done, as well as making it known to society.” “The award is a recognition of a job well done, of quality and international relevance. This award for Best Applied Contribution in the field of Statistics also highlights the applied aspect of the research carried out at BCAM,” Jose Antonio Lozano, Scientific Director of BCAM, and “receiving this award encourages us to continue pursuing high-quality research,” concludes Santiago Mazuelas, Ikerbasque Research Associate at BCAM.

The SEIO – BBVA Foundation Awards, which are given annually, aim to encourage Spanish researchers in Statistics and Operations Research, to recognise the excellence of the contributions published in these two disciplines and to promote their projection to society as a whole.

Veronica Álvarez received the degree in Mathematics from the University of Salamanca, Spain, in 2019. She is at the Basque Center for Applied Mathematics-BCAM since July 2019 where she is developing data science techniques for energy applications. In particular, she is currently working on probabilistic predictions of energy consumption, generation, and price.

Santiago Mazuelas received his PhD in Mathematics and Telecommunications Engineering from the University of Valladolid in 2009 and 2011, respectively. Since 2017 he has been a researcher at BCAM – Basque Center for Applied Mathematics where he is part of the Data Science and Artificial Intelligence area. Specifically, he works in the Machine Learning research line and he is a member of the Maths & AI working group. Before joining BCAM, he was a staff engineer in Corporate Research and Development at Qualcomm, and also worked as a postdoctoral researcher at the Massachusetts Institute of Technology (MIT) Information and Decision Systems Laboratory (LIDS), where he continues to collaborate as a research affiliate.

He received the IEEE ComSoc RCC Early Achievement Award and he has also recently been awarded one of the BBVA Foundation’s Leonardo Scholarships to support researchers and cultural creators with highly innovative scientific, technological or cultural production. His general research interest is the application of mathematics to solve practical problems, currently his work is primarily focused on statistical signal processing, machine learning, and data science.

About Prof. Jose A. Lozano

Jose A. Lozano is the Scientific Director of BCAM since 2019 and Professor in the Department of Computer Science and Artificial Intelligence at the UPV/EHU since 2009. His research has focused, among other areas, on Artificial Intelligence and particularly in the fields of data analysis and combinatorial optimisation. He leads the Intelligent Systems Group research group since 2004 and BCAM’s research line in Machine Learning since 2014.

In his extensive career as a researcher, he has published more than a hundred articles in scientific journals receiving more than 16,700 citations, has supervised 26 doctoral theses and has written two books. In addition, his international prestige has led him to be associate editor of the most relevant journals in the field of Artificial Intelligence and to organise the international conferences with the greatest impact in the field.

In 2021 he was appointed the first and only Fellow of the Institute of Electrical and Electronic Engineering (IEEE) in the Basque Country.

On behalf of the team at BCAM, our warmest congratulations to Veronica, Santiago and Jose Antonio!