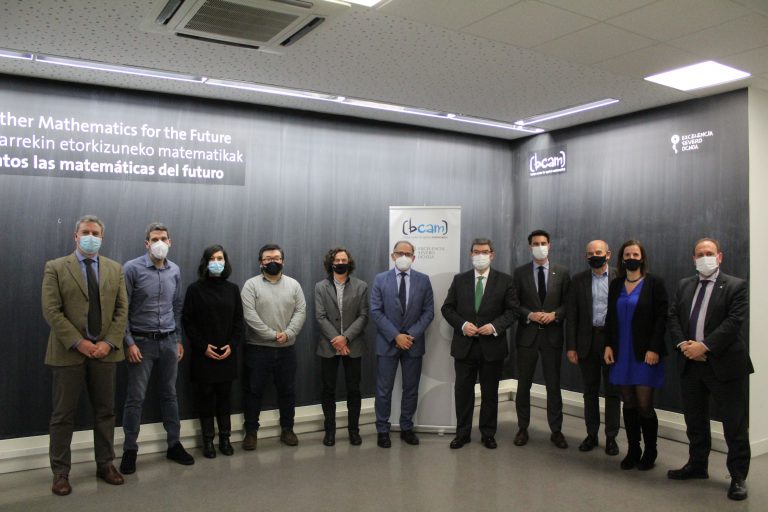 The Mayor of Bilbao, Juan Mari Aburto, visited this morning, together with his team, the Basque Center for Applied Mathematics – BCAM with the aim of getting to know first-hand the activity of the centre and exploring synergies and fostering collaboration between both agents. The event began with a short introduction between the Mayor’s Office of Bilbao and BCAM, followed by a presentation of the Centre for Applied Mathematics – BCAM and the BCAM Knowledge Transfer Unit. This was followed by a space for dialogue to define joint lines of work to promote strategic collaborations.

Bilbao City Council and BCAM have a long history of collaboration in different areas ranging from dissemination to the joint proposal of research projects in the European area. BCAM has collaborated with BilbaoTIK from its Knowledge Transfer Unit in the analysis of data for the profiling of Bilbao tram users. BCAM is currently participating in the Bilbao Zero 2 Think Tank project, an innovation programme to address the new challenges of the city coordinated by Innolab Bilbao.

With regard to possible areas of future collaboration, initiatives for the creation of research spaces were explored, such as TRANSMATH, the Laboratories for Trans-border Cooperation – LTC in Applied Mathematics led by the UPV/EHU and BCAM together with the University of Bordeaux, which provides a framework of stability for collaborations between groups in the Basque Country and New Aquitaine. The potential contribution of BCAM to the city projects Zorrotzaurre: island of knowledge, Bilbao University City, Nagusi Intelligence Center or B Accelerator Tower had also been addressed. The clear alignment between the priorities of the city and the capacities of BCAM positions the center as a highly specialised agent that can accompany the Bilbao City Council in continuing to build the city in the face of its new challenges.

The Mayor of Bilbao, Juan Mari Aburto, has expressed that “It is a pride to have a centre like BCAM in Bilbao, you are a reference centre of knowledge, and knowledge is to be promoted in Bilbao”.

About the Basque Center for Applied Mathematics – BCAM

The Basque Center for Applied Mathematics – BCAM is an international research centre in the field of Applied Mathematics and a centre promoted by the Department of Education of the Basque Government, which is part of the BERC network (Basque Excellence Research Centers). It was created in 2008 by the Basque Government through Ikerbasque. It also has the support of the UPV/EHU, the Provincial Council of Bizkaia, Innobasque and Petronor Innovacion. One of its main objectives is to put mathematics at the service of society through the transfer of knowledge, extending the results of its research to sectors such as biosciences, health, energy or advanced manufacturing, and working jointly with local and international institutions and companies.

It currently has a staff of more than 120 researchers of 25 nationalities working in diverse areas, from data science or computational mathematics to mathematical modelling. BCAM has been accredited twice in a row as a “Severo Ochoa” centre of excellence by the State Research Agency, a distinction awarded to the best research institutions in the world in their field.